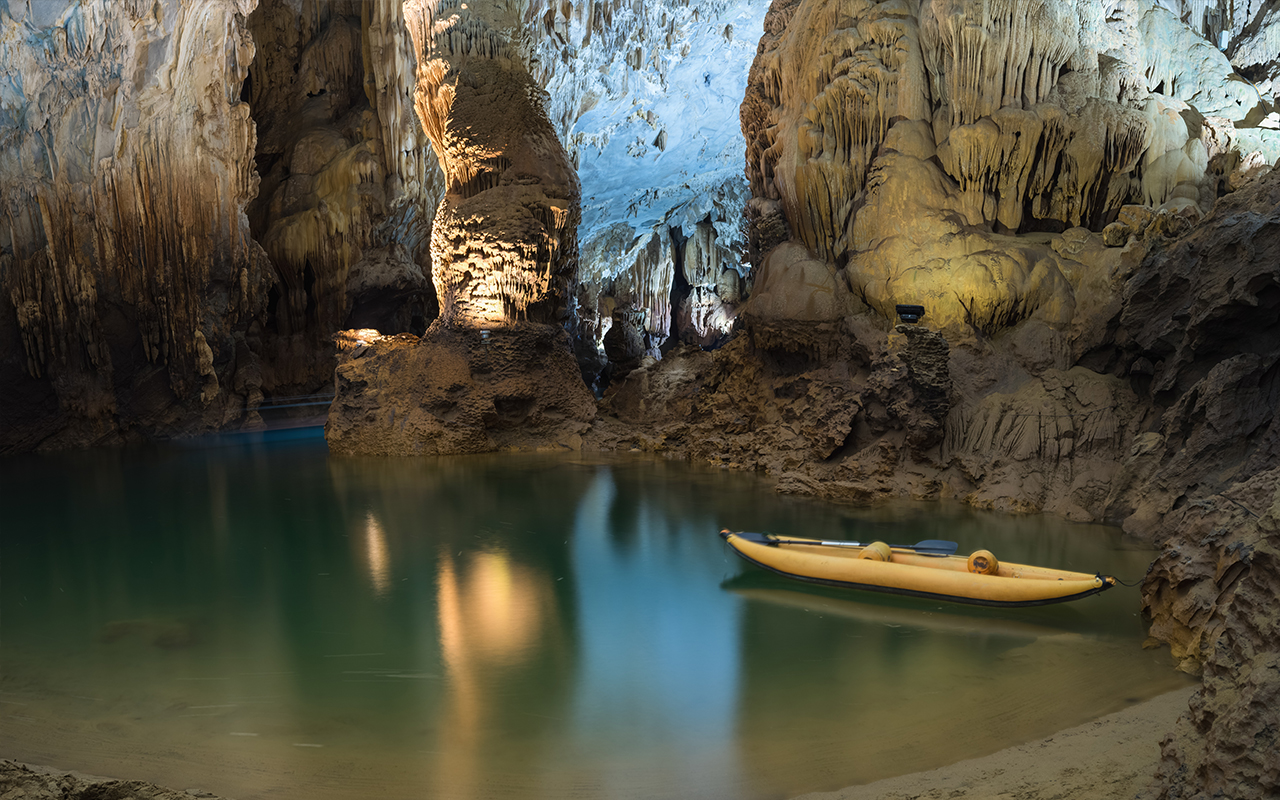 The Phong Nha-Ke Bang National Park in Vietnam contains the oldest karst system in Asia, between 400-450 million years old. Hang Son Doong (Son Doong Cave) itself is relatively young, with the analysis of sediment dating it to be only 3 million years old.

Formed on the edge of a fault zone, Hang Son Doong has been carved out by the mighty Rao Thuong River as it erodes away the limestone, forming the enormous tunnel beneath the Annamite Mountains. Giant sinkholes, known as dolines, have collapsed sometime up to 300’000 years ago, creating massive openings to the outside world. Cave pearls the size of baseballs have been formed by water dropping from the ceiling.

Son Doong Cave is in the heart of the Phong Nha Ke Bang National Park in the Quang Binh province of Central Vietnam. Only recently explored in 2009-2010 by the British Cave Research Association, the cave has only been open to the public since 2013.

Less people have seen the inside of Son Doong Cave than have stood on the summit of Mount Everest. Join us on this otherworldly expedition and become one of the lucky few who have had the life changing experience of exploring the world’s largest cave.

Imagine trekking straight into the depths of the world’s largest cave on an expedition unlike any other. A cave so massive that a 747 could fly through its largest cavern. A space so mesmerising that it forces you to question whether you are still on this planet at all. Foreign landscapes found nowhere else, enormous stalagmites rising from the ground and statuesque stalactites hanging from the ceiling like an alien species. Jungles emerge from inside the cave itself, a scene so surreal that you have to see it to believe it. Misty clouds envelop the whole scene, a result of the cave’s own localised weather system. Passages adorned with ancient fossils offer evidence of the millions of years that have passed on this Earth.

As you approach the jungle just outside the entrance, the rush of cool wind that cascades out brings to life everything inside of you. Hazy, cold and exhilarating, it is apparent that there’s something magical waiting just beyond the opening to the cave.


How was Son Doong Cave first discovered?
From an early age, local man Ho Khanh used to spend weeks on end trekking and maneuvering his way through the jungles of the Phong Nha – Ke Bang National Park, searching for food and timber to earn a modest income.

In 1990 while out on a hunting mission, Ho Khanh stumbled across an opening in a limestone cliff and moved forward to investigate. As he approached he noticed clouds billowing out of the entrance, and could hear the sounds of a river raging from somewhere inside the cave.

When he could feel a strong wind also blowing out from the cave, he decided to move on without further inspection. By the time he had returned to his home a few days later, he had forgotten its exact location and thought no more of it.

At the same time two members of the British Cave Research Association (BCRA), Howard and Deb Limbert, were basing themselves in Phong Nha to conduct exploratory cave expeditions in the area. While chatting with Ho Khanh one day, he mentioned to the caving experts that he had found a cave with clouds and a river inside. Howard and Deb were intrigued and urged Ho Khanh to try and rediscover the cave. After many failed attempts, they began to think this elusive cavern might remain lost in the jungle forever more.

In 2008 while out on another food gathering trip, Ho Khanh found the mysterious opening again and studiously took note of the path on how to get there. In 2009 he led Howard, Deb and a team of professionals back to the cave for the first expedition to enter what would later become known as Hang Son Doong, or “Mountain River Cave”.

How Big is Son Doong Cave?
The first expedition had been halted by an 80m high calcite barrier, which was jokingly dubbed the “Great Wall Of Vietnam”. It wasn’t until their second expedition in 2010, when the Great Wall was finally climbed and the end of the passage was found, that Hang Son Doong was determined to be the largest cave in the world.

At over 5km long, with sections reaching up to 200m tall and 150m wide, Son Doong is large enough to house an entire New York City block, complete with 40 story skyscrapers. With a total measured volume of 38.5 million cubic metres, this comfortably surpasses Deer Cave in Malaysia, which was considered to be the previous record holder. Stalagmites up to 80m high have also been surveyed, the tallest ever encountered.

Life is tough for the minority people here, due to their isolation from the outside world. Access is only possible by foot, and the dense jungles surrounding Ban Doong prohibit the cultivation of most crops. The discovery of Hang Son Doong and the subsequent expeditions that now pass through the village have seen new opportunities arise for the community, who now can earn extra income by working closely with Oxalis to protect the conservation of the area.

For many people, being able to visit Ban Doong and meet its welcoming villagers becomes a highlight of their trip. Ban Doong offers a view of way of life that has been unchanged for centuries.